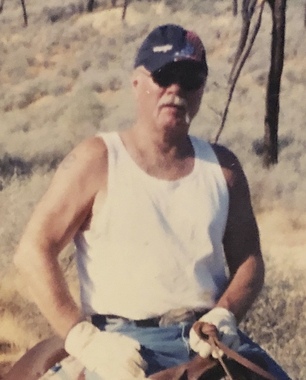 Back to Roger's story

Roger Carnes, 75, of Athens, passed away Monday, November 11, 2019 in Athens.
Roger Lavern Carnes was born September 2, 1944 in Grand Island, Nebraska, the son of Leslie and Eileene Carnes. He served in the United States Air Force from 1961-1965. Roger graduated from San Jose State University with a bachelor's in criminal justice and went on to spend 25 years as a deputy sheriff with the Alameda County Sheriff's Department. Roger married Karla Canright on May 1, 1993. Together they traveled all over the country on their Harleys. He was a member of Life Fellowship in Athens and was a God loving man. He was an artist and enjoyed metal working, especially on hot rods. He would do anything for anyone, a hard exterior, but a cupcake on the inside.
He was preceded in death by his parents, Leslie and Eileene Carnes; sister, Bunny Sargent and daughter, Deanna Carnes.
He is survived by his wife, Karla Carnes of Athens; children, Terri Hurst and husband Bob of Malakoff, Jess Ome and husband Michael of El Dorado Hills, California and Steve Tahsler and wife Lori of McKinney; grandchildren, Emily Allen and partner William Pierce, Kamisha Caillier, Noah Caillier, Jadon Caillier, Lucas Tahsler and Ella Tahsler; great grandchildren, Blake Allen and Hudson Allen; niece, Carrie Sargent; aunt, Patsy Palmer and his beloved dog, Moses.
In lieu of flowers, memorial contributions may be made to the Henderson County Art Club, C/O Toni Stanford, 12101 CR 3900, Athens, Texas 75752.
A private family gathering will be held to celebrate his life.
Arrangements were entrusted to the Hannigan Smith Funeral Home family.
--
Published on November 14, 2019
To plant a tree in memory of Roger Carnes, please visit Tribute Store.

Plant a tree in memory
of Roger

A place to share condolences and memories.
The guestbook expires on February 11, 2020.