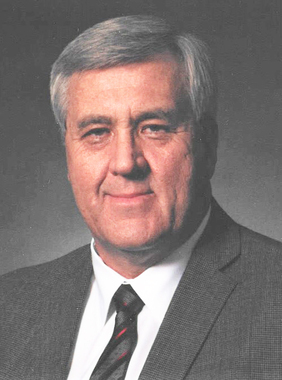 Back to Richard's story

Richard Sanders passed away on January 6, 2020 with his family by his side. He was born on July 17, 1956 to Joe and Lou Ella Sanders in Groom, TX.
Always humble and kind, Judge Richard Sanders, was a pillar of light to the community. He was a standout high school athlete, earning all-state honors in football. He continued with his talents at Angelo State University and then at Southeastern Oklahoma State University where he was an all-conference defensive tackle. He loved sports, classic cars, and fishing. One of his favorite things to do was fish in Broken Bow and make lasting memories there with his family and friends.
Richard began his professional career as a real estate developer and then later became Regional Director for the 5th Congressional District of Texas. Following eight years in national politics, his passion for his community led him to serve as Henderson County Judge where he devotedly sought to make his county a better place to live.
Richard is survived by his wife of 39 years, Kathy Sanders; daughters: Amanda Beltran and husband Daniel, Allison Kocarnik and husband Andrew; grandchildren: Benjamin Beltran, Jaxon Beltran, and Ellie Kocarnik; siblings: Mary Lou Turnipseed and husband Richard, Betty Jo West and husband Mac Hopkin, Raymond Sanders and wife Jennifer, Jo Nell Nelson and husband Raymond, Janey Reynolds, Allen Sanders and wife Shelly, and Tammie Young, as well as numerous nieces and nephews.
He is preceded in death by his parents and sister, Katherine Irene Bigger.
The family invites you to a time of visitation from 5-7 PM on Friday, January 10th at Autry's Carroll-Lehr Funeral Home. The funeral service will be at 10 AM on Saturday, January 11th at the First United Methodist Church of Athens with burial to follow at Athens Cemetery.
In lieu of flowers, memorials can be made to the Henderson County Animal Shelter, 125 N. Prairieville St., #100, Athens, TX 75751.
Published on January 9, 2020
To send flowers to the family of Richard Sanders, please visit Tribute Store.

Send flowers
in memory of Richard

A place to share condolences and memories.
The guestbook expires on April 07, 2020.

Linda Fernald
I shall miss Richard very much. He was always so kind to me. Richard was a real gentle man as well as a humble Christian gentleman. He was loved by so many and left us way to early. My thoughts and prayers are with Kathy and all of his family.
Stephani Galvan

Beautiful in Blue was purchased for the family of Richard Sanders by Stephani Galvan.  Send flowers

Laura Holder
I am so sad to hear of Judge Sanders' passing. What a kind kind man with a heart of gold. Godspeed Judge.
Patti McAlister Williams
Richard was always a sweetheart! Funny, personable, just a great guy! Great memories of high school days with Richard!
View all