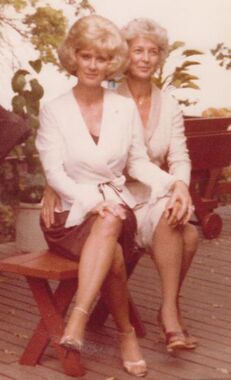 Back to Peggy's story

Peggy Smith, wife of local attorney Don G. Smith, died on May 19, 2017. She was a resident of Park Highland Nursing Home in Athens, Texas for the past several years. She was preceded by her twin sister, Pat Smith, who died on May 24, 1996. Peggy is survived by her husband, Don, and various nieces and nephews.
Graveside services will be held on May 25, 2017 at 10 a.m. at the Payne Springs Cemetery.
In the mid 1930s, two angels were born in the Hill County to Harry & Ruby Griffin, twin girls Peggy and Patsy. Don was married to Pat for 30 years before cancer took her from him. Peggy had never married. Peggy and I were married in 1997. And the twins are together again.
I can see them now holding hands strolling along the streets of pure gold. I sure do miss y'all.
Tearfully,
Don
Published on May 23, 2017
To plant a tree in memory of Peggy Smith, please visit Tribute Store.

Plant a tree in memory
of Peggy

A place to share condolences and memories.
The guestbook expires on August 21, 2017.