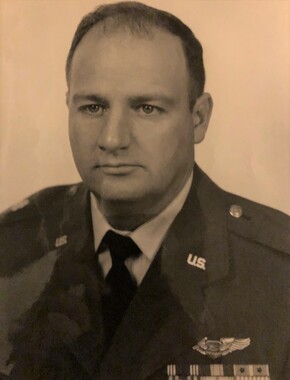 Back to Lawrence's story

Lieutenant Colonel, Lawrence (Larry) Thomas Gates, USAF retired, passed away peacefully in his sleep on December 26, 2019 at the age of 89. He was preceded in death by his parents, Ernest and Dorothy Gates; a son Robert and Daughter Linda; sisters Katherine Coleman, Norma Arbour, Jackie Reichert, Barbara Lombardo Wilson; brothers David Gates, Earnest H Gates; and grandson Dylan Scott.
He was born in Augusta, Maine on August 3, 1930. He graduated from Cony High School in 1949 and immediately joined the United States Air Force, where he spent over 21 years. He went through numerous schools and military bases, thus becoming a master navigator and flying bombers, including B-29 and B-52's. He served his country both in Korea and Vietnam. He retired at Barksdale AFB in Louisiana as the 2nd Bomb Wing Chief Air Weapons Officer.
Upon his retirement, he started a second career with much success, in raising and racing Thoroughbred horses, mostly at Louisiana Downs and Lone Star Park in Texas.
He is survived by his wife of 65 years, Theresa (Terry) (nee Arbour); two sons Dr. James (Mona) of Alexandria, LA and Dr. Thomas (Sheryl) of Schertz, TX; sister Gloria of Augusta, Maine; many nieces and nephews.
Larry was a loving family man who enjoyed his grandchildren, Evan (Morgana), Blake Sanders, Stephen (Lauren), Brianne (Jordan) Reynolds, Ryan (Sarah), Colton (Cora) Sanders, Isabelle, Kyle (Wade) and great-grandchildren Devun, Oliver, Chloe, Naomi, Emma, Theodore, Frederic, Warren, Adelia. He loved watching the boys play baseball and loved having all the family together. Some of his fondest memories were family reunions at the Lombardos in Rhode Island. He was an avid Red Sox fan since the age of 8.
Services and Christian burial will be at Fort Sam National Cemetery in San Antonio with a Deacon officiating. Military honors will be conducted. In lieu of flowers, should friends desire, memorial contributions in Larry s name may be sent to the charity of your choice.
Published on January 7, 2020
To send flowers to the family of Lawrence Thomas Gates, please visit Tribute Store.

Send flowers
in memory of Lawrence

A place to share condolences and memories.
The guestbook expires on April 05, 2020.