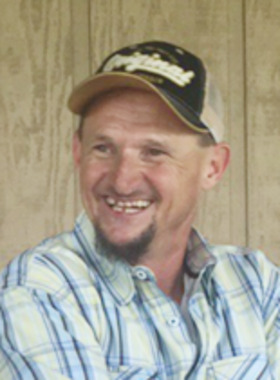 Back to Christopher's story

Christopher (Chris) David McPherson, age 49, of Athens passed away Monday, December 9, 2019 after a lengthy battle with cancer. Chris was born on October 26, 1970 in Tyler, Texas. He lived most of his life in Athens, Texas where he graduated from Athens High School in 1989. His laughter was infectious and is certainly going to be missed.
Chris absolutely loved life and he lived his life to the fullest. He was a jokester and kept everyone laughing! He was just about the best fisherman that you have ever seen. We don't know anyone that could out fish him! He loved riding his Harley especially with his friend Gary. He watched hours and hours of car shows on television, especially Barrett Jackson. He loved to control the television no matter what. He loved his grandchildren with all his heart.
Chris loved to drive an 18-wheeler and he loved the open road. He was an unbelievably talented operator of heavy machinery and an excellent welder. These were his vocations, but they weren't work to him, they were play. He had a workshop that he would tinker in all hours of the night.
Chris accepted the Lord at the Go Tell Crusade held in Athens. He reconfirmed this in a conversation with his Dad on last Tuesday.
Chris was preceded in death by his paternal grandparents, Wheeler McPherson and Bernice McPherson; his maternal grandparents, Charles Cochran and Dorothy Cochran; his brother, Ronald Rance Hood.
Chris is survived by his devoted loving wife Sandy McPherson of Athens; his son Lane Rodgers of Canton; his daughter Quinton Morrow of Granbury; his son, Ross Boyd and wife Tia of Athens; the loves of his life, grandson, Braxdon Boyd, and granddaughter, Averly Rodgers, who loved their PawPaw; his parents, Carolyn and Joe Avery of Tyler and Jim and Judy McPherson of Athens; his grandmother, Janie Cole of Athens.
Also survived by his mother-in-law Janie Boyd of Athens and his father-in-law Donnie Boyd and wife Teresa of Athens; his sister Amy Conway and husband Scott of Martins Mill, Tx, Holly Sciba and husband Jason of Lake Jackson, and Stephanie Evans and husband Brad of Hallsville. His bother-in-law Donnie Boyd, Jr. of Louisiana; nephews, Tucker Conway and wife Ariel, Hunter Conway, Joel Sciba, Josh Dalby and wife Kristen; Niece, Jaycee Conway; great nieces Kenslie Hazelip Conway and Maisyn Conway; great nephew, Layten Dalby. Chris leaves behind lifelong buddies, aunts, uncles, cousins and many close friends.
Family night visitation will be held on Wednesday, December 11, 2019 from 5:00-7:00 PM at Autry's Carroll-Lehr Funeral Home. Celebration service will be held on Thursday, December 12, 2019 at Lake Athens Baptist Church with Pastor Mike Curry officiating. Burial to follow at Oaklawn Memorial Park Cemetery.
Serving as pallbearers will be Tucker Conway, Ross Boyd, Gary Holder, Chad Trammell, Jason Sciba and Lane Rodgers. Honorary pallbearers will be Scott Conway, Hunter Conway, Joel Sciba, Quinton Morrow and Donnie Boyd Jr.
In lieu of flowers, the family request donations be made to St. Jude's Children's Research Hospital 262 Danny Thomas Place Memphis, TN 38105 or Hospice of East Texas 4111 University Blvd. Tyler, Texas 75701
Published on December 10, 2019
To plant a tree in memory of Christopher McPherson, please visit Tribute Store.

Plant a tree in memory
of Christopher

A place to share condolences and memories.
The guestbook expires on March 08, 2020.

Gwen Moffeit
My heart hurts for you all, Jim, Judy, Janie & all of Chris’s loving family 😢😢
God’s peace to you 🙏🙏
Milton and Robbie Hickman
Jim we are trying to share your loss by praying to our Lord. Chris fought a tough fight, and you and his other family were with him all of the way. We cannot ask for more than to be surrounded by the Lord and family.
Chad Hardgrave
My condolences to the friends and family of Chris. Chris was the first person I met when I moved to Athens before my sixth-grade year. I have so many wonderful memories growing up with Chris that I will always cherish.
Kelly Spurgin Palestine Cancer Center
Chris was a very special person who touched my life with his laughter and ability to make light of any situation. he was truly a joy and i am blessed to have known him. Rest in Peace Chris!!!!
View all