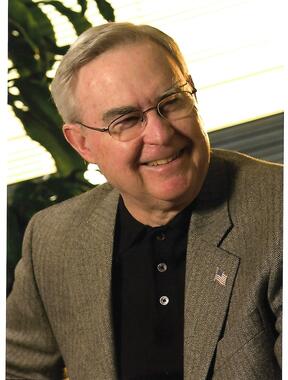 Charles E Ramsey Jr passed away peacefully in his home on March 10, 2020. A resident of Athens, Texas since 1992. He was born on July 26, 1936 in Oklahoma City. At 10 years old, he wanted to be an oil man and geologist like his Dad, Charles E Ramsey Sr and grandfather Walter Roy Ramsey. Although, his first job was a piano player in a bar in Central City Colorado, he eventually had a very successful career in oil and gas after graduating from Colorado School of Mines in 1958. He held several positions in the oil and gas industry, including CEO of May Petroleum as well as oil and gas investments with Dean Witter. He also served on the Board of Directors of Pioneer Natural Resources from 1991-2015 and was Lead Director from 2002 -2015. He was awarded The Outstanding Director Lifetime Achievement Award by the Dallas Business Journal in 2014.
As a resident of Henderson County, he also served on the board of the Henderson County Child Advocacy Help Center, Board of TVCC Foundation, and was active in the Rotary Club and Junior Achievement Award. His interests were fishing, woodworking, community service projects, traveling, and spending time with his grandchildren.
He is survived by his Wife, Lanelle Hardin Ramsey, his two sisters, Peggy McCormick and Jaine Day, sons Jeff Ramsey and Scott Ramsey, Ricky Hardin and Gary Hardin, his daughter Cathy Bolsinger, his grandchildren Charles Joseph Ramsey (CJ), Tricia Jackson, Carle Jiron, Megan Bolsinger, Deborah Bolsinger, Susan Bolsinger, and Jackson Bolsinger, and his 10 Great Grandchildren.
Reception will be held at the Athens Country Club, Friday March 14th at 7:00pm. An additional service will be held in Dallas at a later date and time yet to be determined.
Published on March 11, 2020
To send flowers to the family of Charles E Ramsey, please visit Tribute Store.

Send flowers
in memory of Charles

A place to share condolences and memories.
The guestbook expires on June 09, 2020.

Small Garden Dish was purchased for the family of Charles E Ramsey by Blake and Tamra Boteler.  Send flowers

Franz and Carolyn Duy
We were shocked to read in Dallas Morning News of Charles’s death. We realized he will be missed by all his friends and family. The Ramseys’ were fantastic neighbors when we first arrived in Dallas! God Bless You during this sad time.
Frances Jones
I worked for Charles at May Petroleum and shared many laughs with him. My favorite was getting to fish for striper bass with him on Lake Texoma. He caught both our limits. He was a good man, may he rest in peace.

Fiery Lily and Rose was purchased for the family of Charles E Ramsey.  Send flowers

Serene Retreat was purchased for the family of Charles E Ramsey.  Send flowers

John heberling.
Sorry to hear about your dad. Charles was a serious man in the sense he was accomplished. My girlfriend Susan Williams and I were discussing him today so I looked him up. Her dad and Charles were good friends from May petroleum . Small world. He lived a good life. Raised some great boys. He did it well. Hats off their Charles.
View all