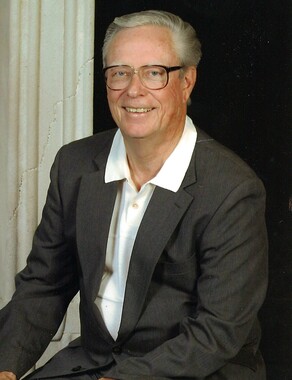 Back to Bill's story

Funeral services for Bill Wright, 84, of Athens, are scheduled for 3:00 P.M., Monday, January 13, 2020 at the First Baptist Church of Athens with Dr. Kyle Henderson officiating. Interment will follow in Oaklawn Memorial Park Cemetery under direction of Hannigan Smith Funeral Home.

Bill passed from this world to his heavenly home, surrounded by dedicated caregivers and loving family, on January 9, 2020 in Malakoff, Texas.
Bill F. Wright was born on June 6, 1935 in Waxahachie, Texas. He was the only child of John and Alta Pearl Wright. As a boy of seven, he gave his heart to Jesus Christ as his Lord and Savior. He was baptized at the Tabernacle Baptist Church in Ennis, Texas. After graduating from Ennis High School in 1953, Bill majored in Accounting at Hardin Simmons University in Abilene, Texas. He later served in the United States Army. He retired in 1997 as a purchasing agent for the Dallas Morning News.
Retirement was composed of working in the yard, carpentry work, fishing, snow and water skiing, special projects, and public service. He published the handbook for his 50th year Ennis High School reunion. He enjoyed all sports, such as football, baseball and especially golf for which he coordinated several annual golf tournaments: First Baptist Church Golf for Missions, the Henderson County American Cancer Society, and Trinity Valley Community College Foundation. He was a loyal fan of TVCC sports, especially the Lady Cardinal Basketball team. He and his wife, Marylyn, were avid "adoptive parents" of the Lady Cardinals. His favorite color was red, especially "TVCC cardinal red." He was a member of First Baptist Church in Athens, Texas where he served as a deacon and as a member of the Counting Committee for many years. Bill was also a Life Member of the Noon Day Kiwanis Club.
Bill was married to the love of his life, Marylyn Riley Wright in 1980. They shared their faith, music, family, and the love of serving in their community.
He was preceded in death by his parents and one son, Frankie Lynn Nichols.
He is survived by daughter DeAnna Elaine Morris and husband Bob from New Braunfels, Texas, daughter Holly Dee Jenkins and husband Raymond of Palestine, Texas, and daughter Caroline Kay Sellers and husband Travis of Conway, Arkansas. Bill leaves a legacy of devotion and faith to seven grandchildren: DeAnna Lester, Courtney Rakofsky, Joshua Nichols, Mikayla Sellers, Tyler Sellers, Will Sellers, and Riley Sellers.
In lieu of flowers, memorial contributions may be made to the TVCC Foundation.
Visitation will be held Sunday, January 12, 2020 from 4:00-5:30 P.M. at the Hannigan Smith Funeral Home of Athens.
Funeral arrangements were entrusted to the Hannigan Smith Funeral Home family.--
Published on January 11, 2020
To send flowers to the family of Bill Wright, please visit Tribute Store.

Send flowers
in memory of Bill

A place to share condolences and memories.
The guestbook expires on April 09, 2020.

Betty mclemore Hawkins. Sends condolences to bills family. From a

Bills family. From a former classmate. Bill was always a very kind and good person.