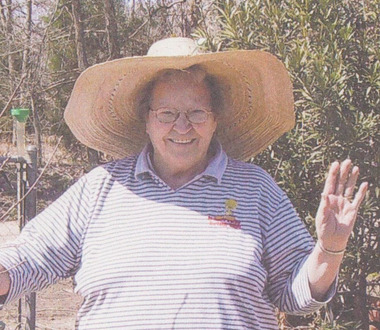 Back to Betty's story

Betty Joyce Turner Oates, 79 passed away February 15, 2017 with her family members by her side in Athens, Texas.
Betty Joyce Oates was born on February 14, 1938 to her parents Thelma and Les Turner. She married the love of her life Billy Earl Oates in April of 1954 and they enjoyed 63 long years of matrimony. She enjoyed quilting and spending time enjoying the wonders of nature while drinking her coffee on the front porch. She also enjoyed cooking and sharing recipes with her daughters and figuring out what new things they could try next.
Mrs. Oates is survived by her husband Billy Earl Oates; daughters Joyce Byers and her husband Vernon; Margie Leitner and her husband Ronald; son Eugene Oates and his wife Sherry; six grandchildren; and 14 great grandchildren; a sister Carol Simpson and brother Elden T. Turner.
She is preceded in death by her mother Thelma Turner; father Les Turner; brothers Jerrell Turner; Welcome Turner; sisters Lorene Dickerson, Sis Vaughn and Evelyn Splawn.
Mrs. Oates was very loved by her family and will be missed greatly.
Viewing will be held Sunday February 19, 2017 at Moorhead - Epps Funeral Home in Gun Barrel City, Texas between 12 and 1 PM with graveside service at Moorehead - Melton Cemetery at 2:00 PM.
Reception to be held at Payne Springs Community Center directly after services. Friends will be there at 10:30 Sunday morning to accept food that anyone would like to bring.
Published on February 16, 2017
To plant a tree in memory of Betty Joyce Turner Oates, please visit Tribute Store.

Plant a tree in memory
of Betty

A place to share condolences and memories.
The guestbook expires on May 17, 2017.